The font is made out of sandstone. Text book opinions of its date seem to vary from about 1300 to the early 16th century.

Carved around the font are arches with rosettes, fleurs-de-lys and a hammer. 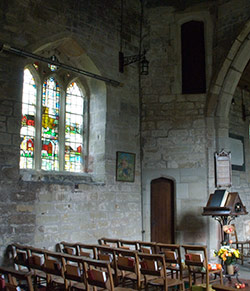 To coincide with some work which needed to be done to the stonework and with the new Millennium, it was decided by the PCC that a Millennium Window be built. This was also funded by the Village, which meets regularly in the church.

The Millennium Window shows scenes reflecting places within the parish.

The Millennium Window was dedicated on 17th June 2001 - St Botolph's Day - in a special gathering of villagers and members of the church congregation.

To the right of the Millennium Window there are two doors, one above the other. Behind the lower door there are steps leading to the higher door.

The higher door originally led to a rood loft. A rood is a crucifix mounted above the entrance to the chancel. A veil would have been attached during Lent from the rood loft. In England during the Reformation, many roods were destroyed.

Situated near the organ, there are two ancient iron bound chests. Each chest is made out of a hollowed tree trunk.

In 1538, Thomas Cromwell, Vicar general to Henry VIII, ordered that registers of births, marriages and deaths should be kept. These registers date back to 1574 and would probably have been kept in the chests.

Situated above the organ, in the corner of the nave, is a head. This is a corbel, originally used to support a beam.

On the North wall, between the organ and the Millenium Window, is a tablet dated 22nd July 1819. Written on this tablet is the Will of Isaac Wells.

He gave a sum of money to the Churchwardens. The annual interest from it was to be used to buy and distribute bread at the Church door on Christmas Day.

This interest amounts to approximately one pound and one wonders how much bread such a sum would have bought in 1819.